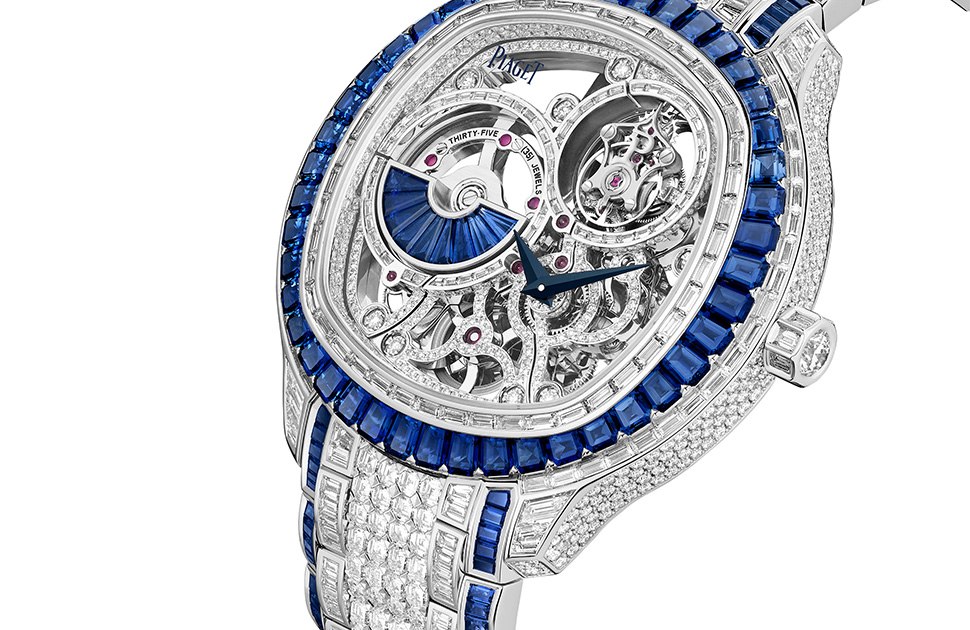 Piaget presents five new Exceptional timepieces that push the limits of high watchmaking and high jewellery to new levels of artistry and enchantment.

Haute Horlogerie and Haute Joaillerie are two arts that have been nurtured in Piaget’s ateliers for over 60 years. The manufacture in La Côte-aux-Fées has been developing and assembling timepieces since the beginnings, while its Geneva workshops, “Les Ateliers de l’Extraordinaire”, have been dreaming up exquisite cases, bracelets and gem-settings to shine a light on the incredible mechanics powering each timepiece.

To assemble the Piaget Polo Emperador Exceptional Pieces, Piaget’s watchmakers have a very high level of skills and savoir-faire. They start with four years of studies, before beginning a second phase of training at Piaget, which also takes a number of years. It is only then that the best students can join the High Watchmaking workshops where they receive further training from the Maison’s master watchmakers, and finally have the opportunity to create the Manufacture most complex and ultra-thin movements.

These five Piaget Polo Exceptional timepieces celebrate the Art of Movement, the Art of Light and the Art of Colour, with exceptional gem-settings using the finest diamonds and most exquisite blue sapphires. The deep blue colour of the sapphires is part of Piaget’s heritage and symbolizes the notion of infinity for the Maison. The expression “The sky is the limit” couldn’t be more fitting for these timepieces that show Piaget’s love for pushing the boundaries of creativity in terms of technology, design, and gem-setting.

Just one look at this Piaget Polo Emperador timepiece and the eye plunges into a magical world of mechanics with an automatic flying tourbillon movement that has been intricately skeletonized and adorned on both sides of the movement with brilliant-cut diamonds. This mesmerising white gold and diamond Piaget Flying Tourbillon Calibre 1270D takes 10 times longer to produce than a traditional flying tourbillon movement. This is because the components are not only heavier with the diamond-setting, but they have been meticulously decorated and polished to the highest level, making the watchmaker’s task of assembling the movement all the more difficult and challenging.

In addition to the magnificent skeletonization, the Caliber 1270D features a fascinating off-centred oscillating weight that has been reversed to display the micro-rotor on the dial side of the timepiece. Set with a fan of blue sapphire baguettes, this micro-rotor brings the Piaget touch of playful moving parts to the front of the timepiece. The micro-rotor is also positioned opposite the P-shaped tourbillon cage, creating the shape of a Lucky 8. The figure eight is a common theme in Piaget watchmaking and is the only number that represents infinity with its never-ending form. The figure eight is also a symbol of prosperity, good fortune, and joy in many cultures, making this Exceptional Piece more than just a timepiece.

The Piaget Polo Emperador High Jewellery Alligator Strap comes in a 49mm white gold case and is fully set with approx. 10.66 carats of diamonds and approx. 14.63 carats of blue sapphire baguettes around the bezel and on the micro-rotor. The setting of the case alone takes 139 hours to complete and is made all the more complicated by the fragile nature of blue sapphires.

The word “sapphire” comes from the Hebrew “sappir”, meaning “the most beautiful thing”. Its most legendary colour is its intense, fascinating blue. Sapphires symbolise loyalty, fidelity, love, and desire with their intense, vibrant, and completely natural colour.

This limited-edition timepiece is water-resistant to 30 meters and comes fitted with an elegant blue alligator strap.

This unique piece is a true demonstration of Piaget’s dual expertise at watchmaking and jewellery. Featuring the same rare diamond-set skeletonized movement as the Piaget Polo Emperador High Jewellery on alligator strap above, this breath-taking creation comes with a matching diamond and blue sapphire bracelet. Piaget only chooses white diamonds of a colour superior to “F” (grades D, E, and F are the highest quality) and a clarity superior or equal to “VVS”, meaning that no inclusions are visible to the naked eye. Diamonds of this quality are extremely rare and show Piaget’s dedication to creating timepieces where the sky is the limit in terms of quality and beauty.

The Piaget Polo Emperador High Jewellery comes on a fully paved bracelet and in a 49mm white gold case and is fully set with approx. 29.49 carats of diamonds and approx. 20.84 carats of blue sapphire baguettes on the bezel, micro-rotor, and bracelet. The setting of this unique piece requires 344 hours of work by the most experienced gem-setters in Piaget’s Atelier de l’Extraordinaire.

The Piaget Polo Tourbillon Relatif Unique Piece combines the Maison’s 608P hand-wound Tourbillon Relatif movement with a fully-set 47mm white gold case, dial, and bracelet. Over 1,300 baguette-cut and brilliant-cut diamonds (approx. 50.50 carats) come into play and showcase Piaget’s incredible artistry – even the crown has been adorned with a reverse-set sapphire for ultimate refinement. The dial has been crafted from aventurine glass and includes a snow-setting of diamonds along with gold stars for indexes, recreating the mystery and magic of a starry night sky.

The creation of the 608P Tourbillon Relatif movement challenges the laws of gravity and balance with its tourbillon suspended from a single axis with the tip of the minute hand providing the perfect balance on the opposite side. The mobile flying tourbillon cage almost appears to be independent of the movement as it beats just above the dial. The minute hand needs to be adjusted and finished with utmost precision so it measures the exact same weight as the flying tourbillon on the other end to ensure perfect balance. The flying tourbillon carriage is also ultra-thin and ultra-light (2.8mm in diameter and 0.2g for the three titanium bridges), and makes one rotation on itself per minute and one rotation around the dial per hour. Piaget is one of the rare watchmakers to use this type of unique and revolutionary construction. Due to the extreme complexity of this movement, Piaget only makes between one and three movements per year, adding to the rarity of this Exceptional Unique Piece.

Completing this amazing line up of Exceptional Pieces, Piaget is also unveiling two new Piaget Polo Emperador timepieces – one in white gold and the other in rose gold. They are powered by Piaget’s 1270S, one of the thinnest self-winding tourbillon skeleton movement that has been developed and created in Piaget’s ateliers. The movement features an ultra-thin micro-rotor in platinum sunray engraved, coated with a delicate shade of colour and adorned with the Piaget coat of arms on the dial side of the watch. The rose gold version is of particular note as it also comes with a hand-finished gold movement that has been decorated to the highest standards of watchmaking with hand-bevelling, mirror-polishing, guilloché work, and polishing on both exterior and interior angles. The skilled work involved in decorating this beautiful gold movement takes an impressive 120 hours to complete.

The Piaget Polo Emperador timepieces come in a 46.5mm x 8.9mm case size and have been set with approx. 1.39 carats of brilliant-cut diamonds on around the bezel. They are water-resistant to 30 metres and are fitted with elegant alligator straps – black for the white gold version and blue for the rose gold version. The rose gold Piaget Polo Emperador watch is limited to 8 pieces while the white gold is limited to 28 pieces.