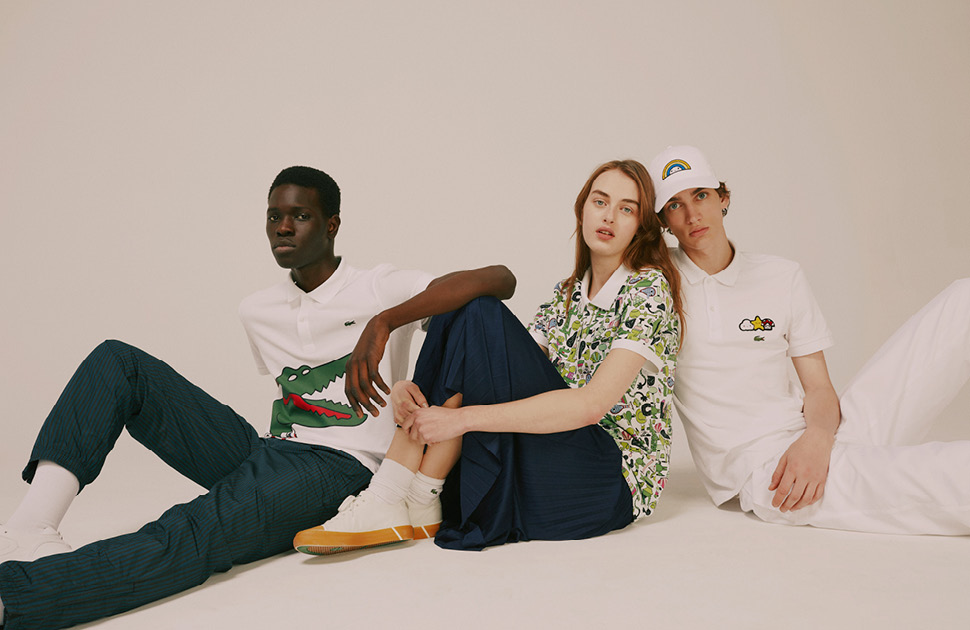 The iconic Lacoste crocodile will enter new creative territory, with three new reinventions. Revised and updated with the candid pen strokes of Samuel Borkson and Arturo Sandoval III of FriendsWithYou, the whimsical style of Jeremyville and clean lines of Jean-Michel Tixier, the reptile is seeing a new day, with a new look. Known for their optimistic graphics and positive world view, the three artists have each produced a colourful collection, reinventing the house’s timeless classics from ready-to-wear to accessories in joyful, offbeat, colourful new style. Each one reinvents the Lacoste world in its own, upbeat style.

FriendsWithYou is a collaborative creative project from artists Samuel Borkson and Arturo Sandoval III. Based in Los Angeles, they have been working towards positive change in the world since 2002. Known for their immersive installations and inflatable sculptures, their work goes further than the contemporary art world, to reach popular culture. For Lacoste, they sent the crocodile into orbit in a colourful, dreamlike world peopled with minimalist, faux-naive characters that see Lacoste’s sporting roots take a warm and unexpected turn towards kawaii.

Based between New York and Sydney, Jeremyville takes comic culture-infused, street art-rooted style around the world. For Lacoste, the artist created a luxuriant and creative jungle, where tennis and crocodiles are blended as one. Lost inside a cheeky design worked in his trademark curves, rackets and tennis balls become hybrid animals; strange, cute little characters who befriend the four-legged reptiles in an abstract and surreal world.

From the pages of glossy magazines, to posters on the walls of the trendiest Parisian brasseries, French illustrator Jean-Michel Tixier has created a crocodile modelled on himself and the people around him. The crocodile becomes human as a stylish hipster, upper-class Paris dad, harried trader, Paris dandy and sportswear-mad teen. An affectionate take in the second degree on Lacoste fans from all backgrounds.

Available at the Chadstone boutique from 17 November 2020.